Sorry, Gentle Readers! I didn't mean to go silent for so long, but the children had half-term holiday last week, and we kept pretty busy. Playdates, a cinema outing (Bolt wasn't half-bad), errands and a couple of days in London.

This week's been back to normal, if by normal you mean I am out of the house all day on various missions! I did go for my mammogram on Tuesday, which I had been dreading (four dear friends of my own age have been diagnosed with breast cancer already). However, avoiding one's mammogram is NOT the rational response. So that is done, over, and I hope shows all clear for another year.

David was thrilled to get to go to the Mart this year (local fun fair - see this page toward the bottom). I'd told him that I thought he'd have to miss it since Daddy is away, and I shuddered at the thought of dragging Lily around a loud carnival with lots of rides that are too big for her. Luckily, his friend Sam really wanted him to come along, so they got to ride all the good stuff on Tuesday, which was also Shrove Tuesday.

Lily and I had our Shrove Tuesday pancakes at home (topped with lemon and sugar, or chocolate spread - nom).

Anyway, back to our London mini-trip. We went down by train, and headed straight to Covent Garden in time for lunch (excellent savoury crepes) and some good street entertainment. Nothing like watching someone do a comedy routine while balanced on a ladder and juggling knives....good stuff!

The kiddies also wanted to visit Build-a-Bear, which we have avoided since we got here. They were thrilled, and didn't much mind waiting in line with all the other over-excited half-term children for their turn to push the buttons and turn the cranks to stuff their very own bears.


Lily chose a basic, and very soft, brown bear, which she named Talitha after a little girl we know. David went for the koala, and chose a leprechaun outfit for him. The koala was dubbed Sydney O'Beary. Both bears travelled the rest of the trip peeking out from the kids' backpacks.

Backpacks - my personal secret for overnight trips to London. Everyone gets a backpack, with their pajamas, next day's clothes and toiletries. Mine's a bit bigger, so I carry the snacks and paper/crayons/book/camera. We keep it light by wearing our jeans twice, bringing light PJs. I also cleverly made everyone wear old socks and underwear on day one, so we could trash it in the morning, rather than packing it up again.


Day two of the trip was spent entirely at the London Zoo, and sadly I have no pictures. We were too busy watching the animals to take many pictures, and none have people in them. Trust me when I say we had a great day. We enjoyed the monkeys the most, but the Komodo dragon exhibit was pretty neat, as was the butterfly house.

For my friends who are or have been in Omaha, got to say...the Henry Doorly Zoo is better. Seriously. The London Zoo is nice, but the Omaha Zoo is NIIIIICE.

I'll leave you with a few more pictures. 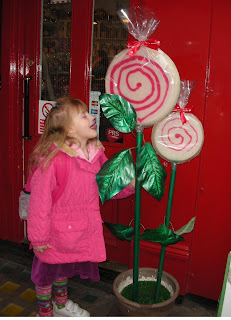 David and Sydney O'Beary - we decided Sydney looks sort of like a tidy Einstein: 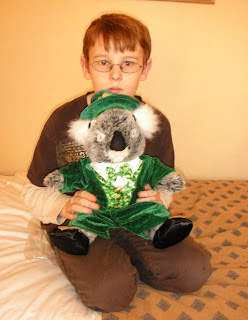 This Victorian postbox has been painted orange and is used for Zoo donations. 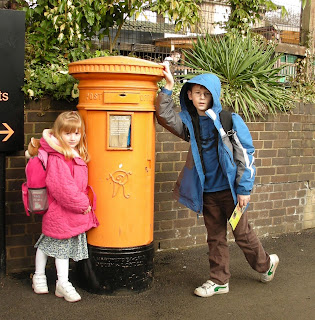 What a fantastic break! I love the lollipop tree and Sydney O'Beary - he looks like a teacher I had at school.

I've never stayed overnight in London... I might have to try it sometime soon, avec backpack! But probably without dogs.

I have to say, I always love to read abt your outings. You always have such fun!!! Love Sydney and had to laugh that you went to build a bear on Saturday. so did baby girl with her aunt!! LOL She used her own money to get a unicorn.