If the Queen Were in Charge... 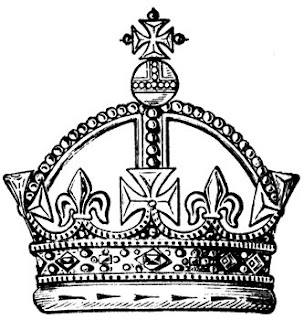 No, I don't mean Me, the Queen. I received this tidbit in an e-mail from my blogless friend Carolyn, and it tickled me greatly. I think we Americans could learn a lot from this!

From Her Majesty The Queen


Just received this communique, FYI:
To the citizens of the United States of America
From Her Majesty the Queen of England
In light of your failure in recent years to nominate competent candidates for President of the USA and thus to govern yourselves, I hereby give notice of the revocation of your independence, effective immediately.
Her Sovereign Majesty Queen Elizabeth II will resume monarchical duties over all states, commonwealths, and territories (except Kansas, which she does not fancy).
Your new Prime Minister, Gordon Brown, will appoint a Governor for America without the need for further elections. Congress and the Senate will be disbanded. A questionnaire may be circulated next year to determine whether any of you noticed.
To aid in the transition to a British Crown Dependency, the following rules are introduced with immediate effect:
1. You should look up 'revocation' in the Oxford English Dictionary. Then look up aluminium, and check the pronunciation guide. Count how many 'i's there are and start to pronounce it correctly.
2. The letter 'U' will be reinstated in words such as 'colour', 'favour' and 'neighbour.' Likewise, you will learn to spell 'doughnut' without omitting half the letters, and the suffix '-ize' will be replaced by the suffix'-ise'. Generally, you will be expected to raise your vocabulary to acceptable levels. (look up 'vocabulary').
3. Using the same twenty-seven words interspersed with filler noises such as 'like' and 'you know' is an unacceptable and inefficient form of communication. There is no such thing as American English. We will let Microsoft know on your behalf. The Microsoft spell-checker will be adjusted to take account of the reinstated letter 'u' and the elimination of -ize.
4. July 4th will no longer be celebrated as a holiday.
5. You will learn to resolve personal issues without using guns, lawyers, or therapists. The fact that you need so many lawyers and therapists shows that you're not adult enough to be independent. Guns should only be handled by adults. If you're not adult enough to sort things out without suing someone or speaking to a therapist, then you're not grown up enough to handle a gun.
6. Therefore, you will no longer be allowed to own or carry anything more dangerous than a vegetable peeler. A permit will be required if you wish to carry a vegetable peeler in public.
7. All intersections will be replaced with roundabouts, and you will start driving on the left with immediate effect. At the same time, you will go metric with immediate effect and without the benefit of conversion tables. Both roundabouts and metrication will help you understand the British sense of humour.
8. The former USA will adopt UK prices on petrol (which you will cease to call gasoline) - approximately $9 per US gallon. Get used to it.
9. You will learn to make real chips. Those things you call French fries are not real chips, and those things you insist on calling potato chips are properly called crisps. Real chips are thick cut, fried in animal fat, and dressed not with catsup but with vinegar.
10. The cold tasteless stuff you insist on calling beer is not actually beer at all. Henceforth, only proper British bitter will be referred to as beer, and European brews of known and accepted provenance will be referred to as lager. South African beer is also acceptable, as they are pound for pound the greatest sporting nation on earth and it can only be due to the beer. They are also part of the British Commonwealth - see what it did for them. American brands will be referred to as Near-Frozen Gnat's Urine, so that all can be sold without risk of further confusion.
11. Hollywood will be required only to cast English actors as good guys. Hollywood will also be required to cast English actors to play English characters. Watching Andie Macdowell attempt English dialogue in Four Weddings and a Funeral was an experience akin to having one's ears removed with a cheese grater.
12. You will cease playing American football. There is only one kind of proper football; you call it soccer. Those of you brave enough will, in time, be allowed to play rugby (which has some similarities to American football, but does not involve stopping for a rest every twenty seconds or wearing full Kevlar body armour like a bunch of nancies). Don't try rugby - the South Africans and Kiwis will thrash you, like they regularly thrash us.
13. Further, you will stop playing baseball. It is not reasonable to host an event called the World Series for a game which is not played outside of America. Since only 2.1% of you are aware that there is a world beyond your borders, your error is understandable. You will learn cricket, and we will let you face the South Africans first to take the sting out of their deliveries.
14. You must tell us who killed JFK. It's been driving us mad.
15. An internal revenue agent (i.e., tax collector) from Her Majesty's Government will be with you shortly to ensure the acquisition of all monies due (backdated to 1776).
16. Daily Tea Time begins promptly at 4 pm with proper cups, with saucers, and never mugs, with high-quality biscuits (you must cease referring to them as cookies) and cakes; plus strawberries (with cream) when in season.

I'm feeling very guilty for neglecting this poor little blog and its faithful readers (reader? Heh). It's been a bit of a crazy week, with Lily's party (21 kids and a good time had by all, but exhausting), heading down to base a couple of times, hanging out at a craft morning, David's mom landing in the hospital (very worrying, but in the end a good thing as they fixed a misdiagnosis and are getting her back to fighting form), hosting a morning social today for some of the spouses of people in D's unit, and various other stuff. Somewhere in there, I attended the preschool's annual general meeting and agreed to chair the committee again this year. That's added a lot of little items to tick off my list as well.

I have pictures from the trip that I need to post or email to Susie (Other Susie) . I have fourteen gabillion blogs to catch up on. Our wedding anniversary is coming up tomorrow (12 years, amazing!) and I haven't even gotten a CARD for D. yet. I did book the restaurant reservation, though.

I miss you guys, and I hope to be a bit more scintillating next week. Maybe even with pictures!
Posted by Susie H at 5:54 PM 2 comments:

Sorry for the incredibly long hiatus but David's return, combined with Susie's visit, has kept me happily overoccupied. Susie was here for almost exactly 2 weeks, and it was a complete joy to be able to hang out with her and talk to our hearts' content, and tour till our feet fell off. What a trip. What a friend!

The main event of her trip was my baptism on the 4th. She even spoke at the service, and I wish she were here to talk every week. Susie, you're a gifted speaker! Here I am, with Elder Anderson, who performed the baptism, right beforehand. The children were deeply amused by the immersion thing, apparently. It was a very moving moment for me, and I was overwhelmed by the emotions I felt afterward. 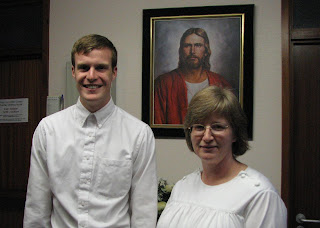 Between Susie and me, we took over 700 pictures during her visit. Kid ya not. There was much touristic goodness happening. Thanks to David's comp. time and some leave, Susie and I were able to do two trips, one for 2 days down to Salisbury/Stonehenge and then London, and a second trip to London for some additional sightseeing the day before she flew back.

Highlights of the touring? Hmmmmm...Castle Rising castle, Sandringham, Salisbury Cathedral, STONEHENGE, Parliament/Big Ben/Westminster Abbey/Trafalgar Square/Buckingham Palace/Piccadilly Circus, Tower of London, Globe Theatre, Covent Garden...I'm sure I missed some there. Oh yes....and we got to see Les Miserables in the West End. SWEET! We took some Traveling Socks along, and got some terrific pictures at SockHenge, Sockingham Palace, and even one of a beefeater holding my sock at the Tower of London. I'm not sure if I am allowed to publish that one :) - he was quite bemused, and amused, however.

Susie is blogging the trip, complete with pictures, but I am SO overwhelmed by how many photos there are, I'll just post this one of Susie, on a double decker bus in London, with that trademark awesome smile. I have so many pictures now of this smile, on this face. What a gift for both of us this trip was!! Thanks, Susie, from the bottom of my heart. 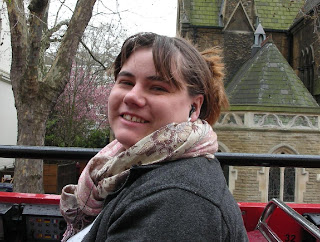 After Susie left for home, David still had several days of leave, and it was outstanding to be able to just... hang out together, recovering a bit from the kids' term holiday, the festival of touring, and everything. I'm so very, very glad he's home again. My evenings are filled with grownup conversation and time with my sweetie. It's like going from black and white to Technicolor. Very sweet indeed.

In other news, sort of caught up in the madness, Miss Lily turned FIVE yesterday! She celebrated with cupcakes at school and a cake last night, but the big party is this Saturday, so I will be sure to blog more then. She told me, "I'm a bit puzzled. I don't feel any different."