This picture looks so pretty at first glance.  Sadly, it's a photo of part of masssssssive island of trash, I guess you'd say, in the Pacific.  Check out the article here. 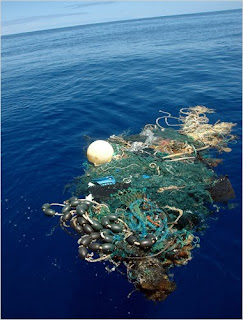 Other interesting stuff - this is a bit more positive.  Turns out that chocolate milk can help lessen hardening of the arteries.  I'm all OVER that one.

Doing a little knitting today, about which more in a minute, as I am home with Flu Boy.

D. blossomed out with the flu yesterday morning. "Hey, it's my little Asthma Piggie," the pediatrician greeted him.  Heh.    Asthma and swine flu.  Get it?  Lame, but he is a wonderful doctor despite the flopped joke.

Because D. has a history of asthma, and had that ER visit/prednisone treatment with a flare in September, the way the doc is having us treat the flu is to treat D. as if he is in the middle of an asthma flare.  So, twice daily preventive steroid inhaler, and rescue inhaler three or four times daily.  The objective is to keep those airways WIDE open, and thus avoid complications.

Seems to be working. D.  is hardly coughing now, and is feeling super-cheerful, despite the fact that a whacking big dose of acetominophen has not lowered his temp to normal!

And I am knitting, which is a change, eh?  It's a fiddly but fun pattern, called the Round the Corner Scarf. [Mine is very similar to the colors pictured, if you add some vibrant pinks.]  I bought the pattern, and the Noro Silk Garden Sock wool, at Great Balls of Yarn in West Palm Beach, FL, when we were visiting for my awesome sister's awesome birthday/week.  Love the wooly souvenirs of travel...
Posted by Susie H at 12:50 PM 2 comments:

Hi, any faithful readers who are still out there.  I disappeared when summer arrived, but I'll try to catch you up, inspired by the efforts of my NaBloPoMo frequent-posting hubby, and friend Susie.

Quick and dirty recap - D. came home from deployment, stayed home for a month and then went away for another month. Then home for all of 2 weeks, during which we took kiddoes to Disneyland Paris for 3 days. Roller coasters and princesses and a good time had by all!  After that 2-week stay, he left for 4 months' training in the states.

We agreed that 4 months is a jolly long time to not see Dad.  After school ended in late July, the rest of us flew to the US for 6 weeks.  The first half was spent with dad, hanging out, revisiting lots of awesome places in the Omaha area, catching up with friend Susie when our families both met up in Cheyenne [minus D who was in class].

Second half of trip was amazingly busy, meeting up with friends galore in MD [thanks to Jill and Norm for the awesome crashpad :)], then down to Florida for my sister's big number birthday party and a week of wonderful time, finishing up in Pennsylvania with our lovely Sheila and then a whirlwind of family and friends the last week in New York.

We got to reconnect with tons of folks - special shout outs to the racetrack siblings and lovely mom-in-law Karyle, to Dawn and Bruce for organizing a great get-together and to David and Donna [aka in-laws] for the massive, wonderful barbecue and party on our last day.  Hubby David was able to fly in for the long LaborDay weekend and get together with everyone, too, and because of other people's kind efforts, all we had to do was show up to soak in time with everyone.

Then it was back to the UK just in time to start the new school year, which is perking along well for both kids.  I had a low month but am feeling much much better.  David came home 2 weeks ago, in time to share in Halloween and Guy Fawkes festivities, and he's been able to take some leave so we can really reconnect.  Good, good stuff.

I'll leave you with David the Younger's homework efforts from tonight.  He was tasked to write a police report about crashing Santa's sleigh. Awesome!  [block-copied from his typed work]

Donner: Vell, here is vot happened from our point of view. Ze elf David was test-drivink ze sleigh. Nothink unusual, just around the house unt back onto ze runvay.


Blitzen: Ja, unt zen he looked down - just for a second to check ze speed - unt ven he looked up, there vas ze chimney, unt CRASH!


Tannen: I was in the workshop, putting the finishing touches on some jack-in-the-boxes, when there was a loud neighing and then a banging sound. Everybody looked up. Nothing happened for a minute,so we all went back to our work, and that was when the sleigh crashed through.


It was so surprising, all my jack-in-the-boxes popped out!


The sleigh was just hanging there with elf David hanging from it looking sheepish. I'm just glad nobody was hurt!